If you follow us on Tumblr, then you know I was away from my post at the beginning of August.  I traveled from the West Coast all the way over to New York City, New York to celebrate my engagement to that fella’ to the left.  I won’t take you through the blow by blow, but spending a lot of money on a ring just wasn’t our cup-o-tea.  Instead, we saved up and went on an adventure together to celebrate!  First, this is a decision I highly recommend because, hello, vacation.  Second, I hope you know I couldn’t go anywhere, even the maze of NYC, without scoring some science.  I know this city is just full of everything, so don’t consider this even close to an exhaustive list.  I would love to know about any of your favorite NYC science scores.

Most of my city going experience has been out west and in Chicago.  So one really special thing, for me, about seeing such an old city was the architecture.  I love that you can see a completely modern building with modern building materials and techniques right next to a church built in 1846!  Just look at that skyline.  You can learn by observation about changing technology as you look from the short, stone buildings to those shiny skyscrapers.  I’ll make my first tourist aside here to state that the Staten Island Ferry ride was both free and awesome.

You really have to admire NYC’s commitment to green spaces.  In such a densely populated urban center, I kept coming across parks, community gardens, and even an ecology center right on the walk home to our apartment.  The first park we really took the time to explore was the cemetery at Trinity Church.  Cemetery you say?  Yes.  Before the care and organization of public parks was formalized, cemeteries (or “memorial parks”) were some of the first public green spaces.  It was nice to see such a historic green area right next to such a historic building.  Some of the headstones were so old the inscriptions had completely weathered away.

From the oldest type of park, to one of the most famous.  Central Park was amazing.  It’s sheer size.  It’s location inside this huge metropolitan area.  It’s an impressive feat to be sure.  In the name of honesty, I have to admit that I was underwhelmed.  Maybe I was just tired, or maybe it was just that nothing was really in bloom when we visited.  Either way, I am fully prepared to be amazed by Central Park on my next visit (maybe during the fall season?).

You know what I was wow-ed by?  The American Museum of Natural History.  We spent 6 hours here, and I could easily have spent 6 days.  What a great museum!  We started off in the hall of North American Mammals, then on to the hall of West Coast Native Peoples.  Then we realized we had spent about 3 hours in two halls!  From there, we proceeded to crush the Human Evolution Exhibit (amazing.  wonderful.  on point.) and the Meteorite/Minerals hall.  I never ever expected this exhibit to feature the science behind crystalline bonding, but it did.  I know that Chelsea spent a summer at the AMNH doing space geology, so I thought about her the whole time I was losing my mind over the meteorites.  From there we buzzed through the hall of Marine Biodiversity before entering the hall of Vertebrate Origins.  I’m sort of an obnoxious ball of “Did you knows?” all the time, but I may have gone into overdrive when I saw all those amazing specimens.  Mammoth selfies ensued.

We had grand plans to go to a few more museums, but it just didn’t pan out this time.  Always have to leave something to do on the next visit!  We did manage to make it to the Museum of Modern Art.  This is another great museum.  And though it is not an explicitly science based museum, I learned a few things that didn’t have to do with zips or color composition.  Mobile technology is changing lots of traditional experiences.  For example, free of charge, MoMA lends out iPod Touches containing free audio tours.  I really got a lot more out of my art museum visit as a result.  For example, I learned that the type of paint Picasso used was cheaper, because he was penny pinching, and that could be why some of the colors he used have been altred with time.
This brings us to my favorite find of the trip, the Brooklyn Botanical Gardens.  I could wax rhapsodic about this space for quite some time.  I will sufice it to say that I loved it.  I wish I could return in the spring to see the cherry blossoms going.  And talk about affordable!  Even if you don’t want to shell out the $10 dollar admission fee (only $5 for students!), you can get in for free every Tuesday.

I know I’m over selling at this point, but not only was this an amazing place to learn about botany and plant biodiversity, the buildings were a lesson in sustainability.  The visitor’s center had a green roof, which captured rain water and fed it into a nearby stream.  All the glass on that building was also bird safe (check the vertical stripes, birds can see that!), and they cooled their water efficiently by sending it underground. 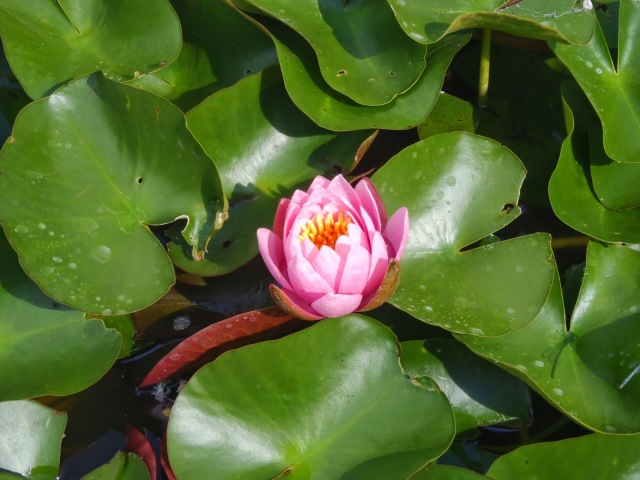 Probably the coolest thing we saw in the gardens was this amazing piece of art. This sculpture was called “Sandy Remix” and it was made mostly  from garden trees killed during Hurricanes Sandy and Irene.  The trees are arranged to look like a swirling hurricane, and you can walk up into the tree house and, thus, into the eye of the storm.  The informational sign not only gave information about the art, but the importance of climate change and its impacts.  It was a very powerful experience, and a wonderful monument to remember the storm.

Last on my tour of NYC science and natures spaces was the High Line.  This excellent park is built on historic freight rail tracks elevated above the city streets.  It was high on my list of things to see due mostly to the amazing blending of natural and man-made items in this space.  There was a bit of cool interpretive information about which native plants were blooming at the time.  Overall, this place was a very peaceful way to take a walk uptown. 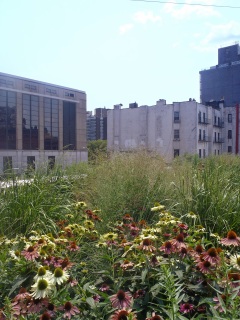 I went to New York, I saw some amazing science related spaces and artifacts.  I know I must have missed some really good ones.  Go ahead!  Tell me what I should go and see next time I visit.  Also, if you have any interest in the hilarious amount of vegan food I ate or the less science-y side of my adventure, feel free to hop over to my Instagram.