For nearly my entire life, I have lived within the home range of the Southern Flying Squirrel. However, if you asked most folks I grew up with or people around central Pennsylvanian, you’ll find is it rare to find anyone who has seen or even heard one. It’s likely they had no idea it was even a possibility! Growing up, I certainly never hear of any Southern Flying Squirrels in the woods surrounding our home. And perhaps it’s all this newfangled statistics knowledge making room in my brain by dumping stuff from undergraduate courses, but I also don’t really remember talking much about them in the Mammalogy course Rachel and I took where we were supposed to be able to ID EVERY Kentucky mammal. That course was a doozy – do you know how many little brown bats there are?! (Editor’s note: So many.  But they are in danger!)

Earlier this year instead of spending my day as I typically do (on campus working on research) I was able to join a fellow #StatStud graduate student, tagging along with her father out in the local wilderness. Steve Eisenhower is Regional Director for Natural Lands’ New Jersey preserves but since his daughter has joined the statistics department he has also expanded his work in New Jersey monitoring flying squirrel and kestrels into central Pennsylvania. These additional boxes have been added through his own personal volunteering efforts, in partnership with Shaver’s Creek, a resource for the community, and as a field laboratory for Penn State students to get hands-on experience teaching about the natural world. The extra opportunities to observe these species add to the general knowledge for conservationists, an they are a great opportunity for science outreach in these areas.

Getting to the flying squirrel and kestrel box locations was much easier than I anticipated. As an undergrad, going out to switch out batteries and memory cards on the bird/frog call recording boxes out on the WKU biology department run Upper Green River Biological Preserve was an all day event that included lots of canoeing and traipsing through stinging nettle. This time around, I got to spend most of the day eating snacks and driving across central PA.  Our first few boxes were located within Shaver’s Creek. In addition to housing the most adorable bundles of fuzz, the flying squirrel boxes allow for better monitoring and understanding of these critters that often glide under the radar (hashtag sorry not sorry). In central PA it’s possible to encounter both Northern and Southern species. One question these boxes can help address is how these species’ ranges are shifting with global climate change. It’s thought the Northern squirrels are moving further south and observations at different locations can help to find answers. (I’m sure there’s also a lot going on with genetics – how different are species, populations, etc.)

The kestrel boxes we visited were located on two farms, locations that  are not only ideal for attracting kestrels, which require open habitat, but also great for an extra opportunity to engage the community. You might see these fierce birds quite often, but having a family of them in a box on your land brings that extra sense of responsibility and involvement. These visits were a little more involved as chicks need to be banded. Bird banding helps to monitor Kestrel survival and movement. The age of chicks during banding is important. Ideally the chicks would be about 17 days old (squeeeee!). Too young and there is risk to their survival. Too old and they might start getting too sure of themselves and TRY TO FLEDGE TOO SOON.

At the first box we got to see the mother fly off, annoyed at our intrusion. But the chicks weren’t ready. Cute, but not ready.

At the second box the owners of the farm joined us and we all got to experience the banding process. These chicks were juuuuuuust right. 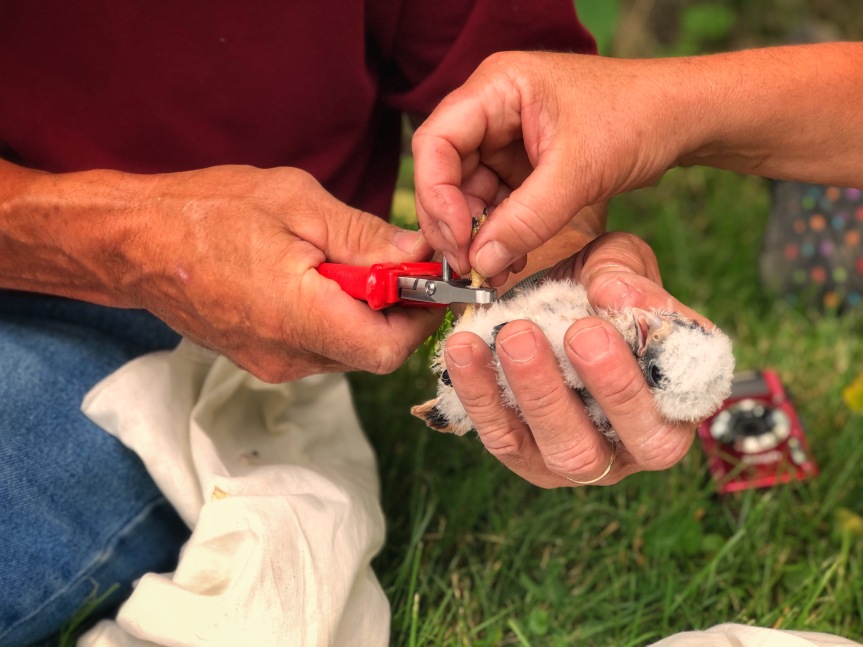 One thing I left behind when switching to statistics is field work. I certainly do not want the early mornings, the long hours, or the permit acquiring headaches (I do, however, get plenty of coding related headaches…). I worry sometimes I am moving too far away from the beauty and excitement of it all. I don’t want to lose my scientist roots or my connection to the curiosity that spurs from exploration. Days like this do so much to refuel my Get Outdoors tank as well as motivate me to away say yes to learning more about how we observe and understand the world around us.

Hundreds of kestrel chicks were banded in Pennsylvania this year. I got to help with 7 of those chicks. At the start of the day I had zero knowledge about flying squirrels. Now I have seen one and learned enough to help get even more people excited about the sneaky critters that may be closer than they think.

One thought on “Checking Boxes: A Statistician in the Field”

We are 100% back on our bullshit. Get ready #esa2019 #sweetteascience
*NEW POST* National Park Roadtrip Days 19-21 Olympic National Park – Park #7! Homeland of the Quinault and the Hoh Reaching the Olympic Peninsula meant taking our first ferry ride. We hopped on the ferry as the sun was setting over Seattle and arrived at the gates of Olympic National Park in the wee hours. With the guidance of yet another trusty park ranger we enjoyed overnight trips hiking in both the Hoh Rainforest and alongside the Pacific Coast. The beauty we observed here makes this park one of our absolute favorites. Read more about out adventures on the STS blog! #linkinbio Posts on the STS site are still sporadic, but we’ve got some fun new posts planned for the coming weeks. Keep an eye on the blog! #amazingbestiesNProadtrip #PacificNorthwest #ExploreWA #optOutside #womenwhohike #womenwhocamp #temparaterainforest #beach #ocean #OlympicNP #STEMblog #STEMblogging #actuallivingscientist
*NEW POST AND GIVAWAY!* Check out our #ScienceBookClub book review and enter to win our copy of #StateofWonder! Contest is open to 🇺🇸 only and closes on April 28. Link to enter is at the bottom of the post. . We’d also love to hear all of your book recommendations! Summer reading is nearly upon us. . . . #reading #recommendedreading #ScienceReading #AnnPatchett #STSfavorites #STSblog #STEMreading #STEMbooks
*NEW POST* This weeks #STSblogpost was inspired by one of @alwaysscientist’s IG posts about PhD visit day in her department! Check out this post for a behind the scenes peek at what goes down during recruitment day for a Statistics department at an R1 university! Be sure to share your own experiences with recruitment events in the comments. . . . #phdlife #gradschool #gradschoollife #gradschoolblog #gradschoolblogger #research #statisitics #statsstud #PSUstatistics #phdrecruitment #STEMblog #STEMblogger
Hi March...wait, April! What a wild few weeks for your STS scientistas. We are both working hard with lots on our plates but we still managed three posts in the blog in March! Blog win! What items do you like to have handy when you’re hard at work? Water, tea, and headphones are must haves for me! . . . #teamTea #butfirsttea #focus #productivity #phdlife #phdchat #hydrate #matchalatte #scienceBlog #ScienceBlogger
Waters are high in the restored floodplain of the Putah Creek Riparian Reserve, just to the south of UC Davis. #flooding #cawx #ThisisRachel