Another day on the road and once more the scenery is gorgeous. It’s also really enjoyable to take in while going the posted speed limit: 80 mph! We had a lot of state to cover. Of the five different National Parks that Utah has to offer, Zion and Arches are the furthest two apart. Going from Z to A is a fresh change of pace. We were really beginning to appreciate Utah, maybe it has a bit of a bad rap due to the wimpy beers and excess salt in lakes. However, things started to get a little shady. We were in need of lunchtime refreshments and were desperately searching for a rest stop. Now, normally, every so often there are places you can pull directly off the highway, have a tinkle, stretch your limbs, and suck up some caffeine. In Utah, they are a little confused. After changing highways, we spotted a telling blue sign for a rest stop and exited. We were already looking around for the parking lot area, however we were quickly instructed via subsequent signage to continue back towards the highway we’d just left. 3 miles. To a gas station? The sign in front proudly announced the rest stop, sponsored by Cheveron. It was a Cheveron. Oh, Utah. You got us.

Rachel’s Ramblings:
Have you ever gotten lost?  I’m guessing most people have.  However, I’m willing to bet that this happens to me more than the average bear.  I don’t know if it’s because I have a tragically bad sense of direction, or if I’m just too busy thinking about other things I have to do later, you know, after I achieve my destination.  In either case, I’ve been lost a fair number of times.  I’ve actually stopped calling it “being lost,” because that sounds too negative.  Now, whenever I find myself off the beaten path for some reason, I am “on an adventure.”

Lucky for Meridith, I took us on one such adventure when we were traveling from Zion to Arches.  But really, who wouldn’t want to pass back through Zion and see all those amazing sandstone formations one more time?  Basically, I got my easts and my wests a little confused and, BAM, our adventure had begun.  Lucky for me, after I gave Meridith many “I’m sorry”s accompanied by my best doe-eyed sad face she forgave me and saw the good in the situation.

Our new path would take us through Dixie National Forest (http://www.fs.usda.gov/main/dixie/home)!  This is quite a large national forest (almost two million acres according to their website), and in the high elevations that we were driving through is dominated by aspen and various conifers.  This area is also dotted with many lakes.  Many of the lakes we passed were lovely with intact floodplains.  We admired the scenery of Dixie National Forest, about to be back on track when…the road was closed ahead, and we were redirected into Cedar Breaks National Monument.  At this point, we were just rolling with it.

Cedar Breaks National Monument (http://www.nps.gov/cebr/index.htm) is an equally beautiful place to visit.  We drove through the high elevation forests, and saw some really stunning vistas.  I love high elevation meadows like the one pictured.  In front of all the meadows we passed were signs reading “Don’t Drive on Meadow.”  While that might seem like it would go without saying, it’s an excellent move on the part of Cedar Breaks to keep traffic off the meadows.  Subtle changes in elevation (like those resulting from foot traffic…or cars) can have major impacts on meadow ecosystems.  You might also notice in the right of the meadow pictures a stand of dead spruce trees.  We noticed this in Cedar Breaks and Dixie.  This is the result of the native spruce bark beetle which has reached epidemic proportions in recent years.  You can get the full story here (http://www.nps.gov/cebr/planyourvisit/upload/Why%20Are%20The%20Trees%20Dying%20Site%20Bulletin.pdf).  The current scientific theory is that a fungus is weakening tree’s natural defenses so trees that should fight off bark beetle infestation end up succumbing to the attack.  They are working on the problem, and increased scientific understanding is feeding directly into management action.

After passing out of Cedar Breaks we were (finally) back on our original route and heading out of Utah and into Colorado!

Getting lost while on a park trail is a major concern that you should keep in mind when hiking. Many parks have trails that are well developed and easy to follow. Other trails may be a bit more difficult to follow if they are a more natural terrain or if heavy weather is present. Some mountain trails experience white-outs that make things rather difficult to navigate. The current solution to this dilemma is about as simple as they get. You’ve probably already seen it and perhaps didn’t recognize the significance.

Or, rather, those silly little rock piles that you see everywhere.

They are actually handy little guides.

Maybe if Zion had used them to mark the route to Arches we wouldn’t have gotten lost…I mean gone on a surprise adventure. 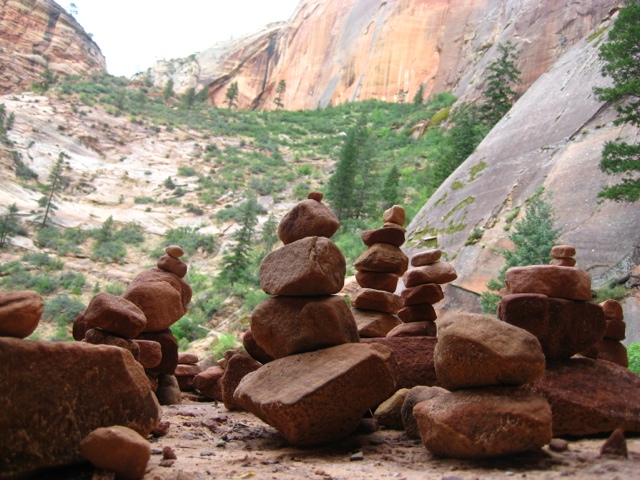 Question of the Day:
Have you ever been hiking a trail that used rock cairns? Did you know they were so helpful?